Situated South of Sao Martinho do Porto and reached via the IP6 from junction 14 of the A8 is Peniche a busy fishing town with a large harbor and some excellent seafood restaurants. In the main square is the baroque Misericordia Church with a painted ceiling depicting scenes from the New Testament, but the town's most famous building is an imposing 16th century fortress. It was once used as a prison controlled by dictator Salazar's secret police to incarcerate political opponents and today houses a museum about local history.

Portugal's rugged Atlantic coast. As late as the mid-16th century, the town was part of an 8-kilometre-wide island, although an accumulation of sand gradually joined it to the mainland to form the present peninsula. Today, the town is most famous for its lace-making and numerous fish restaurants, which during the summer serve up some of the tastiest sardines in Portugal. What to see. At the water's edge on the south side of town stands the 16th-century Fortaleza, used as a prison during the repressive Salazar regime. It now contains a musuem of local archaeology and crafts, incorporating former cells, solitary chambers and the visitors' grilles. In Largo 5 de Outubro, the Church of the Misericórdia has 17th-century painted ceiling panels depicting the life of Jesus Christ and patterned azulejo glazed tiles from the same period. Nearby. A 3-km walk eastwards lies the breezy Cabo Carvoeiro and the Chapel of Our Lady of Remédios, which contains 18th-century blue and white azulejo glazed tiles. Laced with grottoes and coves, the Berlenga Islands are an hour's journey by boat from Peniche. Berlenga Grande, the largest of the group, is a nature reserve with nesting sites for seabirds. It also has a 17th-century fort. 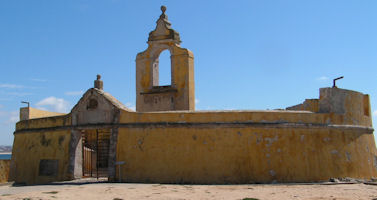 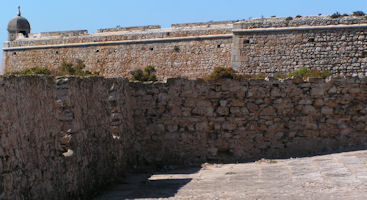 There is a fantastic sandy beach nearby, Baleal, with good surfing conditions and to the west is Cabo Carvoeiro, a rugged cape with bizarrely shaped pinnacles and sea caves offering panoramic ocean views all the way to the islands of Berlengas. Accessible by ferry and with wonderful cliff and sea views, the biggest island is a magical place declared a nature reserve. It is home to thousands of seabirds, and the azure waters are ideal for deep-sea fishing and diving. The surrounding weird rock formations and spectacular grottoes can be explored on small boats that pass through a breathtaking sea tunnel called Furado Grande. Only a handful of fishermen are permitted to live here, but the 17th century São João Baptista Fort, built to defend the area from pirates, is now a basic hostel.

If you are interesting in a trial at surfing The Silver Coast is a great place to find regular waves and the Peniche area has a number of surf schools and you can find information about a couple here: -

For a rather more relaxed day you could try a visit to the Budda Eden Gardens an area of about 35 hectares designed as a place of reconciliation. Without any religious tendency, inviting all to come together, to communicate and meditate, to rest and rediscover happiness. The Buddha Eden Garden is a not for profit organisation and no entrance fee is charged but donations are gratefully recieved.
To find the Budha Eden Garden take the A8 and leave at Exit 12 to Carvalhal, follow signs to BuddhaEden.