21 Kms north east of Sao Martinho do Porto lies the municipality and city of Alcobaça in the district of Leiria. The city grew along the valleys of the rivers Alcoa and Baça, from which it derives its name.

Below are view of the current town and a view of Alcobaça from the castle mound. 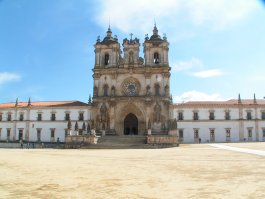 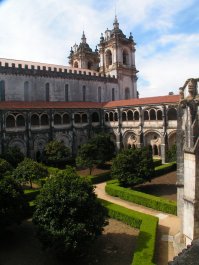 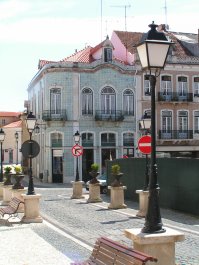 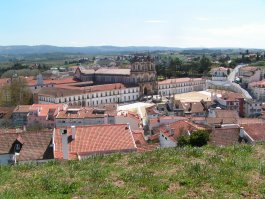 Alcobaça is best known for the nearby Monastery of Alcobaça. The Monastery (Portuguese: Mosteiro de Santa Maria de Alcobaça) was founded by the first Portuguese King, Afonso Henriques, in 1153, and maintained a close association with the Kings of Portugal throughout its history. The church and monastery were the first Gothic buildings in Portugal, and, together with the Monastery of Santa Cruz in Coimbra, it was one of the most important of the mediaeval monasteries in the country. Due to its artistic and historical importance, it was listed by UNESCO as a World Heritage Site in 1989.

In the church are the tombs of King Pedro I and his murdered mistress, Inês de Castro. this is a tragic story of forbidden love ever-lasting. Forced at an early age by royal duty he had to marry Constanza, the Infanta of Castile. She died within a short time of the marriage ceremony and created the opportunity for Dom Pedro to escape with his true love and live in the city of Coimbra. King Afonso IV as his father, believing that the family of Inês to be a threat to his own kingdom had her murdered. Their tombs originally side by side now lie on either side of the main isle of the church near the alter.

The older part of Alcobaça, around the monastery, has a number of small streets often cobbled and full of shops and houses. There is also a mound to the West of the town which retains some limited ruins of the town's castle.

For more information on Alcobaça use these links: