The town of Batalha developed alongside the Monastery of Santa Maria de Vitória. Construction of the monastery commenced in 1386 but it remains unfinished. The monastery was built to keep a vow by Portuguese King Dom João I to the Virgin Mary, that he would build it if Portugal defeated Castile at the upcoming Battle of Aljubarrota on 14th August 1385.

The Battle of Aljubarrota was part of a war between the emerging kingdom of Portugal and the Castilians who claimed right to the Portuguese throne. Forces commanded by King João I of Portugal and his general Nuno Álvares Pereira, with the support of English Longbow men, opposed the army of King João I of Castile with its Aragonese, Italian and French allies at São Jorge, south west from Batalha towards Alcobaça, in central Portugal.

Despite being heavily outnumbered, the Castilian force numbered about 31,000 against the Portuguese force of about 6,500 the Portuguese won a decisive victory. This ended the Castilian ambitions to the Portuguese throne, ending the 1383-1385 Crisis and assuring Joao as King of Portugal. Extravagant celebrations commemorating this victory are held next to the monastery in August of every year.

The Monastery was to be the Portuguese monarchy's main building project for the next two centuries. It is a stunning example of filigree stone work and beautiful design, and is where the highly original, national Gothic style evolved, profoundly influenced by Manueline art, as demonstrated by its masterpiece, the Royal Cloister. Ornate archways lead to magical chambers and chapels and its exterior is a veritable throng of sculptures of saints and other important characters. However, its piece-de-resistance, the Royal Cloister, displays much evidence of the beginnings of Manueline style in its nautical carvings. More exceptional examples of Manueline masonry can be found in the seven chapels which lie unfinished, interestingly because the masons in question were taken by Manuel I to Belém in Lisbon to start work on the magnificent Mosteiro de Jerónimos.

Inside the Monastery of Santa Maria de Vitória a number of elegant tombs belong to people of great importance in Portuguese history. Carved figures of King João himself and his English wife Philippa of Lancaster lie peacefully, hands held, protecting their final resting-place in the Chapel of Founders. Nearby lies the tomb of their decidedly more famous, yet never crowned, son Henry the Navigator. Part of the monastery is also set up as a museum dedicated to the memory of fallen soldiers, and here two tombs belonging to unknown Portuguese soldiers of World War One continue to link this grand memorial, a now distant conflict and present times

The town itself is small and fairly nondescript, most people opting to stay in nearby Fátima, Alcobaça, Nazaré or Sao martinho do Porto on the coast and making this a well-deserved day trip. However there are places to stay and eat here, including the luxurious pousada just opposite the Monastery, and the surrounding countryside comprises the Serra d'Aire and Candeeiro, both beautiful hilly areas famous for their wine production.

Some pictures of the monastery 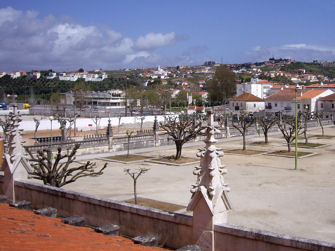 View Larger Map
For more information use these links:

A museum, Fundação Batalha de Aljubarrota dedicated to the battle of Aljubarrota is in the small town of São Jorge on the road between Batalha and Alcobaça. The museum has its own website