8 Kms north of Sao Martinho do Porto lies the picturesque village of Nazaré which, it is suggested, got its name from a statue of the Virgin Mary brought to town from Nazareth by a monk in the 4th century.

Today it is Portugal's most famous fishing village, having always drawn visitors to its beach and genuinely colorful life. Until not too long ago, fishermen were still seen using oxen to pull their brightly painted boats from the ocean. The fishing boats are Phoenician in design (Phoenician,s being origianl settlers in the area) with bright colors and eyes painted on the vessels, supposedly with the magical power to avert storms. This style of boat is popular along the Costa Prata. 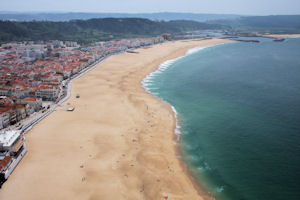 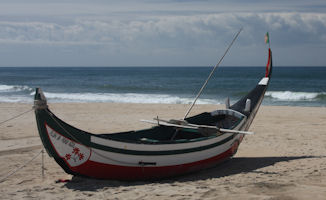 The Casa Museu do Pescador (R. Sousa Lobo) is a small museum dedicated to the fishing population of Nazaré. Contained within a traditional cottage, it has been lovingly restored to show the exterior and interior of the home of a typical fishing family for the early part of the 20th century.

Another tradition which doesnt date as far back as the original settlers but is nonetheless quite unique is that of the seven skirts of Nazaré. Fisher women here still wear seven colourful layers of skirts, as well as wooden clogs and a predominantly black headscarf. It is said that they represent the seven days of the week, the seven colours in the rainbow, the seven waves in a set and many other biblical, mythical and magical attributions which involve the number seven. Their arrival on the fashion scene in Nazaré is attributed to the fishwives of old who would await the safe return of their men on the beach in cold, wet, and windy conditions, developing the multiple layers to keep warm. The number finally settled on only reinforcing the notoriously superstitious character of seafarers and their families. These women and the fishing industry they support are celebrated in a Momument to Nazare Women in the Largo dos Cedros.

The main town is at beach level but sitting on a rocky promontory looking over the town is the area known as Sitio. This is one of the older areas of Nazaré and one of its claims to fame is the Ermida da Memória or Capela da Memoria, a 12th century chapel, whose origins are closely connected to the miraculous appearance of the Virgin Mary. Acording to legend, one misty morning in 1182, local nobleman Dom Fuas Roupinho was hunting and realised at the last moment that he had in fact chased his deer to the very edge of the cliff. Just as he too was about to fall to his death, he cried out to Our Lady of Nazaré who appeared before him and halted his horse. In honour of this life-saving miracle, Roupinho ordered a chapel to be built. The tiles inside the chapel depict the legend and outside is a pillar with an inscription commemorating Vasco da Gama's visit here after his voyage to India, giving thanks to Our Lady of Nazareth for his safe return.

The main church of Sitio is the Igreja de Nossa Senhora da Nazaré. The church, founded in 14th century, was rebuilt in the 17th, 18th and 19th centuries. Semicircular steps lead to a Baroque portal under two square belltowers. There are cloisters to the front and left of the building. Inside there is highly guilded decoration in the Alter area. The many azulejos (blue and white tiles found in many churches) were made in 1708 by the Dutch ceramist Willem van der Kloet(16661747). They depict biblical scenes, among them Joseph being sold as a slave by his brothers. 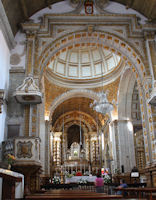 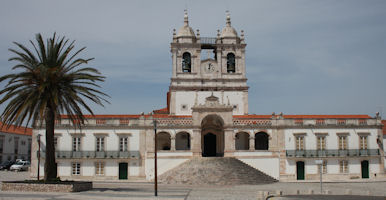 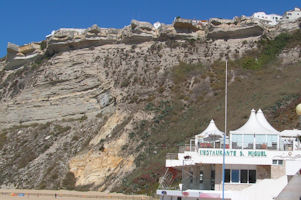 Although this mainly residential part of Nazaré is accessible by car, by far more interesting is the funicular railway which takes passengers up the sharp slope for a small fee. A winding path also exists but is perhaps more appealing on the way down!

Worth a visit, if you have children who like to play in the Water, is Norpark or Norparque a water park with a number of pools, slides and water based activities.

For more information on Nazare use these links: